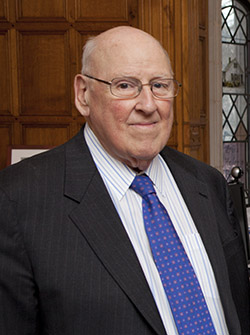 “As a Yale law professor and federal appellate judge, Ralph Winter was a giant of American corporate law. From his seminal 1977 article defending state chartering of corporations as a ‘race to the top’ to his hundreds of finely crafted opinions, Judge Winter shaped corporate and securities law for nearly 60 years. For his generations of grateful students and law clerks, this modest and warm man was our beloved teacher, mentor and friend.”

Robert J. Giuffra, Jr. ’87, Chairman of the Center’s Board of Advisors, Co-Chair of Sullivan & Cromwell LLP and Partner in the Litigation Group, and former law clerk to Judge Winter.

Judge Ralph Karl Winter Jr. ’60 was a member of the Center’s Board of Advisors and a preeminent scholar in business law, who was the William K. Townsend Professor of Law at Yale Law School before being appointed to the U.S. Court of Appeals for the Second Circuit, and continuing to teach at the Law School as an adjunct lecturer through 2014.

While at Yale Law School, then-Professor Winter made a seminal contribution to the study of corporate law. Corporate law classes today still teach students about something called the “Cary-Winter debate.” There was no debate until Ralph Winter came along. A distinguished Columbia Law School professor and former SEC Chairman, William Cary, had written an article in the Yale Law Journal in 1974 contending that states had been engaging in a “race for the bottom” in corporate law—a competition to provide legal regimes that put managers’ interests over those of shareholders. Cary urged the federalization of minimum standards for corporate law. His position was the consensus view of corporate law scholars at that time, as evidenced by a letter to Congress signed by eighty law professors in 1976 endorsing a role for the national government in corporate law. Ralph Winter, who was a party of one, responded to Cary in 1977, with the contention that regulatory competition was, to the contrary, a race to the top—that corporations were economically incentivized to charter themselves in states providing legal regimes that lowered the cost of capital by maximizing shareholder value, and that states, seeking corporate franchise fees, responded accordingly. The contemporary perspective on the state competition debate is now more focused on whether other states compete with Delaware to provide laws that maximize shareholder value, and whether laws can be fashioned that would better address shareholder value than those of Delaware. Even scholars critical of state competition and self-identifying with Cary’s view of managers’ conflicting interests contend that Delaware does better at protecting shareholders than other states. In short, Ralph Winter’s core insight transformed the scholarly debate.

Judge Frank Easterbrook of the Court of Appeals for the Seventh Circuit, himself a leading corporate law scholar, has described the 1977 article by Ralph Winter expounding the race-to-the-top insight as “the single most important contribution to the economic analysis of corporate law since Ronald Coase published ‘The Nature of the Firm’ in 1937.”  As Center director and YLS faculty member Roberta Romano ‘80 put it, reflecting decades later on Ralph Winter’s pathbreaking scholarly contribution and Judge Easterbrook’s assessment: “What is most striking about it, to me, is not its originality and persuasiveness; those qualities are self-evident, and are widely recognized.  Rather, what is truly striking is that Ralph’s article went sharply against the grain of the academic consensus of the time.  If you follow the academic world, you know that this is a not a career-advancing move.  It takes a person of strong character and conviction to be willing to swim against the tide in his scholarship.”

Ralph Winter was not only a preeminent scholar of corporate law. In the realm of labor law, he coauthored with Harry Wellington in 1971 a seminal Brookings Institution book on public-sector unionism, The Unions and the Cities. The book’s thesis was that government was not just another industry, and that politically powerful government-employee unions, through the use of a legal regime designed for private-sector labor, could distort the political process and divert public resources to their members to the detriment of the public.  It was a prescient work, identifying what is recognized as contributing importantly to the fiscal difficulties confronting many states and municipalities at present.

During his years at Yale Law School, Ralph Winter did not confine himself to teaching and scholarship. In addition to working as a consultant to the Senate Judiciary Committee’s Subcommittee on Separation of Powers from 1968 to 1970, he actually practiced law; nearly a decade and a half after graduating from Yale Law School, he had finally decided to take the bar examination. He soon had a client who needed his help in an important case. The client was James L. Buckley, then the junior United States senator from New York, and today a senior judge of the D.C. Circuit. The case was Buckley v. Valeo, the landmark First Amendment challenge to numerous provisions of the Federal Election Campaign Act of 1971. The liberal Democrat Eugene McCarthy, the former senator from Minnesota, was a co-plaintiff in a case supported by the American Civil Liberties Union. Ralph Winter, having only recently become a member of the Connecticut bar, argued the case in the Supreme Court of the United States, and won.

On November 18, 1981, President Ronald Reagan nominated Ralph Winter to serve on the Second Circuit, and the Senate confirmed him shortly thereafter.  He had been the first law clerk to then-Judge Thurgood Marshall when he was appointed to the Second Circuit in 1961, and had remained in close friendship with the Justice throughout his career. Justice Marshall traveled to New Haven to administer the oath of office to his protégé and lifelong friend, in a ceremony at the Yale Law School Auditorium.  From 1997 to 2000, Judge Winter served as chief judge of the Second Circuit, taking senior status in 2000.

In 2017, Judge Winter received the highest honor bestowed by the federal judiciary on a member of its guild, the Edward J. Devitt Distinguished Service to Justice Award, in a ceremony at the Thurgood Marshall United States Courthouse in New York, which was attended by active and senior Court of Appeals colleagues and five members of the Supreme Court (i.e., Elena Kagan, Sonia Sotomayor ’79, Anthony Kennedy, Ruth Bader Ginsburg, and Clarence Thomas ’74). Earlier, in 1996, he received the Federal Bar Council’s Learned Hand Medal for Excellence in Federal Jurisprudence.  He was also recognized by the Yale Law School, receiving the Alumni Award of Merit in 2000 and by the Center for the Study of Corporate Law, receiving the Center’s Simeon E. Baldwin Award for Distinguished Achievement in Law and Business in 2008.

Ralph Winter loved the intellectual give-and-take of the classroom, once telling a reporter, “Part of the fun is to be the devil’s advocate and say outrageous things and let them drive you back.”  He was also beloved by his students and law clerks. In 2002, former clerks, students and friends established the Judge Ralph Winter Lectureship on corporate law and corporate governance at the Law School to commemorate his foundational corporate law scholarship and distinguished career as a jurist.  As Roberta Romano has noted: “The endowed gifts that have been established in Ralph’s honor at YLS by his former students and law clerks are testimony to the profound influence he had on their lives. They are acts of public recognition of a cherished memory of a teacher and mentor.”

We would like to thank the U.S. Court of Appeals for the Second Circuit for permitting us to use passages from its posted memorial to Judge Winter.  The complete Second Circuit memorial is available here.

Other memorials to Judge Winter include: