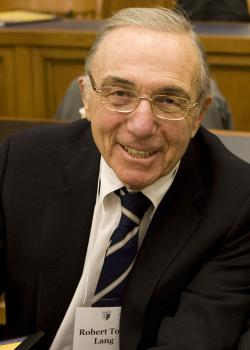 Robert Todd Lang ‘47 was a senior partner at Weil, Gotshal, & Manges LLP. He was instrumental in the creation of the Yale Law School Center for the Study of Corporate Law, which was established in 1999 following conversations between Lang and then Dean Anthony T. Kronman ‘75. Lang served as Chairman and Founder of the Center’s Board of Advisors, and his generosity helped establish, among other things, the annual Weil, Gotshal & Manges Roundtable, which fosters dialogue among academics, legal practitioners, leaders of the business and investment communities, and policymakers.

In addition to his work with the Center, Lang served as Chairman of the Board of the Yale Law School Fund, and was a graduate of Yale College. In recognition of his distinguished service in law and business, Lang received the Simeon E. Baldwin Award from the Center in 2007.

As Professor Roberta Romano ‘80, YLS Sterling Professor of Law and Center Director, said while reflecting on Lang: “although [Todd] was at the apex of the profession, he was one of the most generous and humane individuals whom I have met in my career…”. He was also one of the most visionary, as “Tony Kronman so elegantly put it…, ‘Todd saw more for the law school in his imagination than battalions of others do with open eyes.’” The Center, which is only a part of Todd’s legacy, proved “transformational for business law at Yale Law School: Students, faculty and alumni in the law and business areas have been benefiting from Todd’s foresight and generosity for close to two decades. The law school experience has been enormously enriched by the variety of speakers and programs that the Center has brought to New Haven, sponsoring approximately 25 programs per year, as has faculty research, as the programs have fostered interaction on both the evergreen and breaking issues in corporate law. They have ranged from the evolving role of general counsel, talks by future Nobel prize winners in economics on their research, judges from Delaware - the preeminent corporate law courts – about their docket, and the future chairman of the Federal Reserve on fintech. Before the establishment of the Center, there were only a handful of programs that at best could be identified as even tangentially related to corporate law.”  The complete reflection on Robert Todd Lang from Professor Roberta Romano is available here.

In the legal community, Lang’s dedication to his firm and the practice of law was renowned. After joining Weil in 1948, he went on to become its tenth partner. Along with several others, Lang managed the firm until 1989, overseeing tremendous growth during this time period and fostering a culture of entrepreneurship, teamwork, camaraderie and commitment to the greater community. In addition to being co-managing partner, Lang was chair of Weil’s Corporate Department for many years.
During his illustrious career, Lang was a frequent lecturer and author on corporate, acquisition and securities law topics. Indeed, he was pivotal in the development of these areas of law, having chaired or served on numerous bar committees and task forces, including the American Bar Association’s Business Law Section Committee on Corporate Governance, as well as its Task Forces on Shareholder Proposals, Listing Standards of Self-Regulatory Organizations, Hedge Fund Regulation, and Review of the Federal Securities Law. Lang also served as a director of Human Rights First (formerly the Lawyers’ Committee for Human Rights).